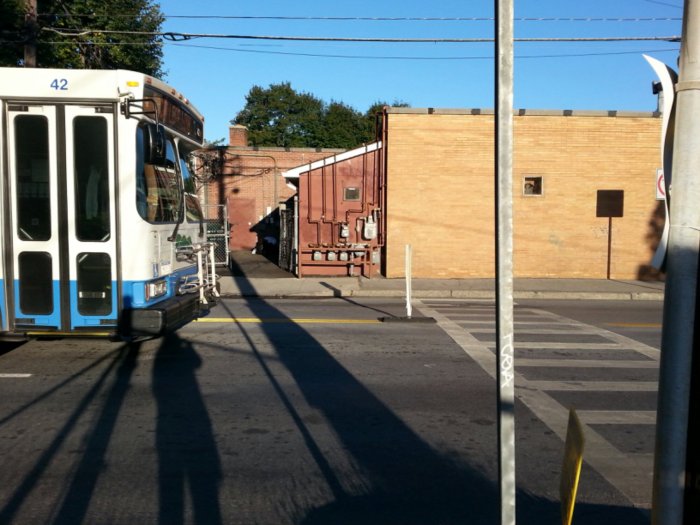 This is how you’re supposed to do it! ((Completely unscripted – Thank you UCAT)) 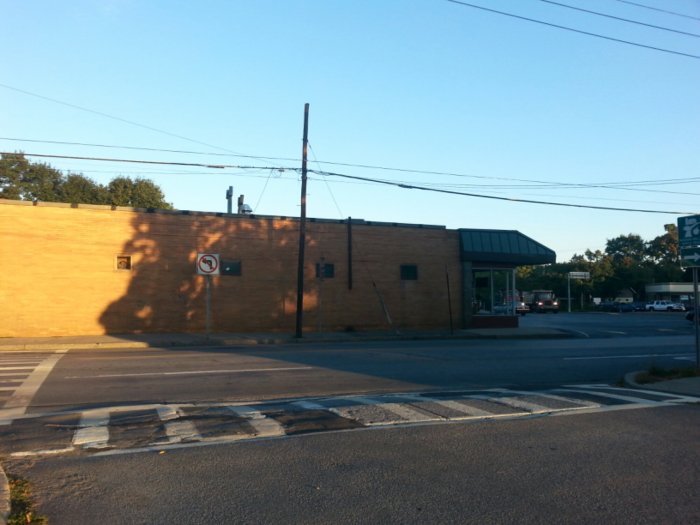 School behind me, facing plaza

Sunrise at the intersection 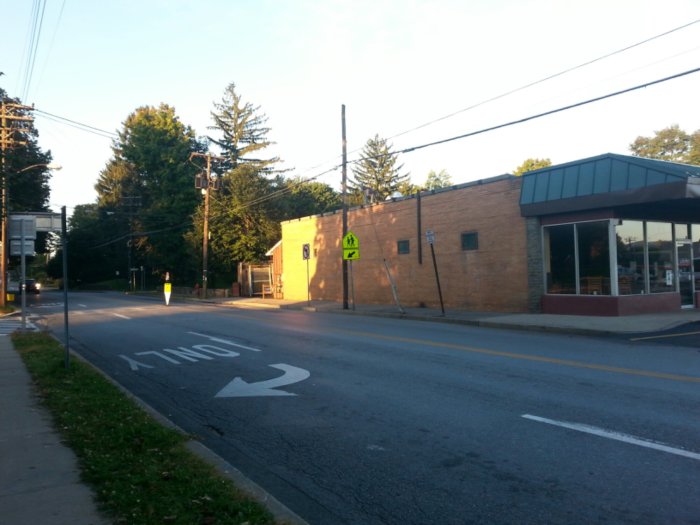 School on the left, plaza on the right 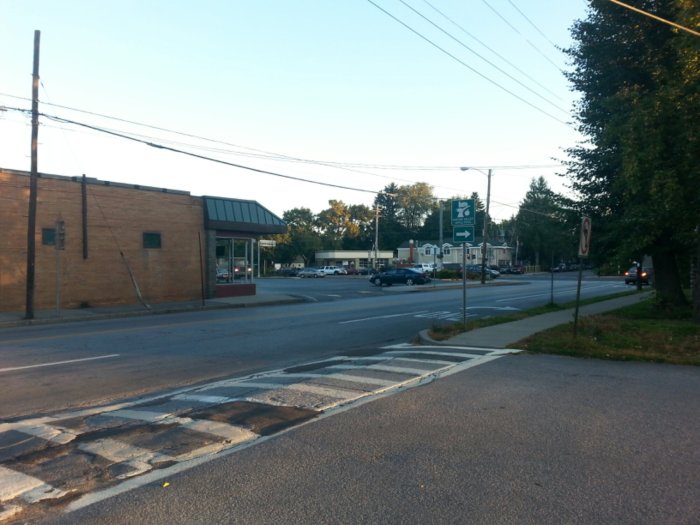 keep reading… the meat is between the last 2 pictures… 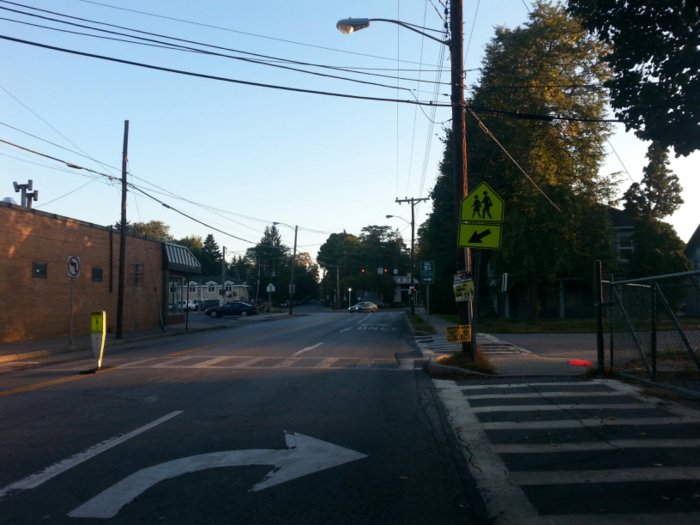 The picture above and the picture below are the bread of my “why this is important to me” sandwich -In the middle is the safety of kids (and other pedestrians). I will, right up front admit, I have “driver arrogance.”  I hate dodging pedestrians, especially downtown.  My driver arrogance is matched and exceeded only by “pedestrian arrogance.” I hate that “pedestrian right of way” means “you can just step out in front of on coming traffic because they have to stop for you.”  You guys drive, you know what I mean.  It wouldn’t even be so bad if they would step out… and then… HUSTLE – but no… it’s a nice slow strolling meander through any part of the street they feel like walking across.   I live here, I accept that there is going to be foot traffic. I accept that the road belongs equally to the cars, trucks, motorcycles, bicycles, skateboards and pedestrians.  But if everyone does their part, we can all be safe with the least amount of inconvenience for everyone involved.

I (mostly) love my town/village.  I grew up here and I walked to the same middle school that I now stand in front of every morning and afternoon.  My children took the bus.  When I first “discovered” that New Paltz NEEDED a crossing guard for the middle school, I immediately consulted my friends.  That’s what I do. I rant, rave, bitch and moan.  Then, I either let it go, or decide it was a warranted rant.  One of my childhood friends said, “Mare, WE walked and no one helped us, we all did just fine.” — so I wondered, about the difference between then and now.  There were roughly 100  people in my entire graduating class, the class of 2012 had almost 200.  Clearly the population as increased.

In the picture above you can see one lane on the far left and 2 on the right. One day I was driving into town and I was in the center lane headed straight for the main intersection. The lane to the right was stopped – for what I assumed was someone turning into the school. As I headed toward the intersection, and through the cross walk – a kid stepped out from in front of the car in the right lane.  I barely missed him.  It was not his fault.  He was in the cross walk.  It was not my fault, my light was green and I did not SEE anyone in the crosswalk – until he stepped out.

I hope that’s not a feeling you ever have to experience. It’s extremely unsettling to be that close to almost killing a person, no less a child. I didn’t even see him.  Had I got to that intersection a fraction of a second sooner, and I would have hit him. So after much bitching and moaning on Facebook I decided my “upsetness” was justified.  Someone asked if I knew Amy Cohen.  At that time I didn’t, but I found out that her kids walked and this was IN DEED a SERIOUS issue and it was only “new” to me. Parents of the children who walked had been fighting for this. That was 3 years ago.  In that time we got a guard and lost a guard.  I’m doing this for now, but I know if I left tomorrow, there would be no one else to do it.  No one would be assigned or have their job duties redefined to allow them to go out for the hour in the morning and the hour in the afternoon. Amy is currently on the Police Commission and I know this topic is still a passion for her. She is, actually, a huge part of the reason I’m there now.  She has not let this important issue be forgotten.

Links to all the newspaper articles are in the “Drama” tab at the top of the page – you can see the New Paltz Police, the School District itself, the governing bodies of the Town of New Paltz, as well as the VIllage of New Paltz all agree, it’s a dangerous intersection. When a school bus stops, a stop sign pops out, lights flash and drivers are forbidden from passing until the child is safely across the street.  How come we don’t give the kids who walk the same protection from gigantic steel and fiberglass pedestrian squashing machines? If you take a bus we care about you, but if you walk … hey kid, good luck with that.

The picture below shows where I almost got hit. A child was on the sidewalk waiting to come back to the school.  I started across the intersection and had the 2 lanes headed to town stopped.  As a walked toward the sidewalk, I lifted the flag to alert the car in the lane closest to the plaza that the child needed to cross.  I use a gigantic 2 ft by 3 ft orange safety flag. I would not be exaggerating if I said, it IS the size of a small child.  The car didn’t see me, or the flag and drove – literately – right into the end of the pole. I am so grateful that child waited for me like I asked him to.  I am so glad he didn’t step off, even one second sooner and he would have been hit by that car.

I can write about this, community members can see the chaos, parents who drive can experience the gridlock and children can actually be struck by moving vehicles – but until all the parents and community members fight as adamantly for the safety of the walking children as they do for the bussed children, this will continue to be an issue. 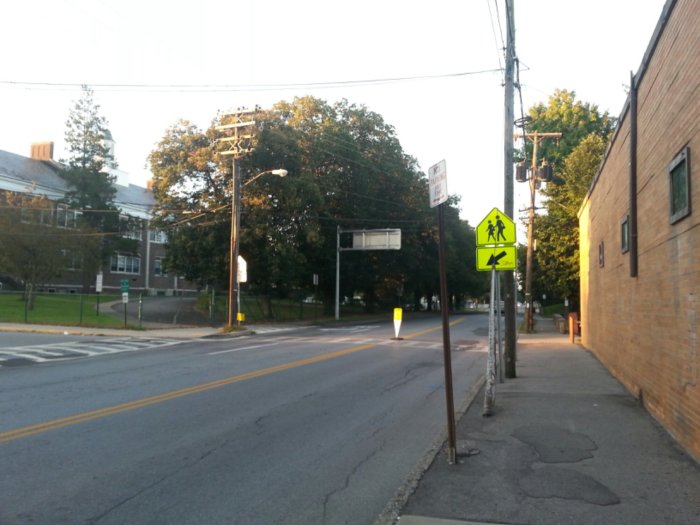 The school from the Plaza